10/16/08. Patrick Robertson and I set off from Rocky Pointe Marina at 0737. We had intended to leave at 0700, but it was still too dark to see the many pilings and hazards on Multnomah Channel. Patrick ran the stern spring line as we backed out of the slip in a picture-perfect departure. 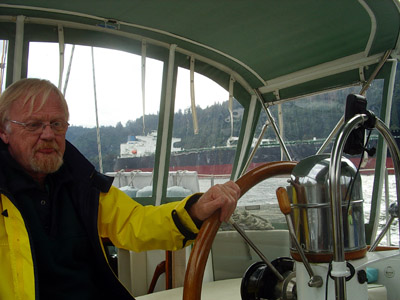 A mile below Fort Westward, we came across the first of many gill nets that were stretched across the shipping channel. To say that it was a surprise would be an understatement. Fortunately, the water was calm and I was able to see the small white floats that mark the top of the net. We steered around the net and the small fish boat that tended it. We encountered a dozen or more as we headed downstream. 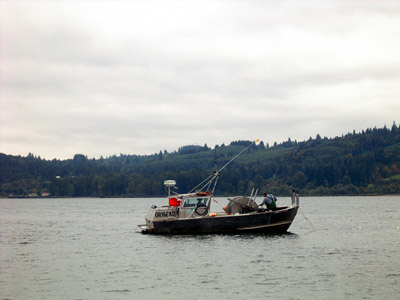 The boats, usually 25 feet long or so, were equipped with big hydraulically-driven drums on which the nets were wound. Bow-pickers tend the nets off the front ends of the boats. The pilothouse is a low structure at the stern. Others are stern-pullers; the net drum is aft of the pilothouse and the net is laid and retrieved off the stern. We noticed that bow-pickers and stern-pullers seemed to be segregated and rarely mixed on the same stretch of the river.

I had to stand out on the deck with the binoculars to see whether an upcoming fish boat was a bow-picker or a stern-puller, then see whether a net was set off the appropriate end of the boat. The distal end of the net is usually marked by an orange buoy. We had to dodge out of the shipping channel, often to one shore or the other, to avoid powering over a net. One fisherman powered up to us and told us that he had just set a net across the channel, and would we please hug the Washington shore to avoid hitting it.

We met or were passed by several freighters, an oil tanker, and tugs pulling barges full of wood chips. Sometimes the shipping channel was very narrow and we motored close to shore or shoals to give them room. 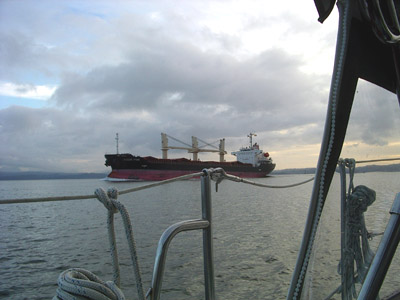 I had expected that we would get about halfway to Astoria, or perhaps a bit more, but by 1830 we were anchored in the basin south of Mott Basin, just a few miles from Astoria. We made 72.9 nautical miles in 10:54 hours, with an overall average of 6.4 knots and a maximum speed (no doubt half due to current) of 9 knots.

10/17/08. A beautiful day, calm and warm, with high clouds and occasional sun. We hung on the anchor until after noon. I started the Espar heater for the first time since its post-installation test. It warmed the cabin up quicklywe didn't have the heater on for even an hour before we were too warm and had to turn it down.

Before we started raising the anchor, we turned on the deck wash pump so we could wash the anchor chain. Unfortunately, the supply hose between the pump and the deck fitting was perforated and all the water flowed into the bilge. We ran the anchor chain all the way out so I could lift the floor of the anchor locker. The hose was leaking just below the floor, probably worn through by abrading against the edge of the plywood floor. We didn't have a coupler that would fit, and the pieces of hose that we had were too short to replace the whole thing. I marked the anchor chain at about 290 feet with four long nylon wire ties to alert the operator that the end was near.

At 1237, we raised the anchor, rinsing it with a bucket of water occasionally, and motored toward Astoria. I decided to test run the engine faster than yesterday, up to 2300 RPM, and within a half hour the engine was overheating. We throttled back and the temperature dropped. It looks as if we can't run it much over 2000 RPM. 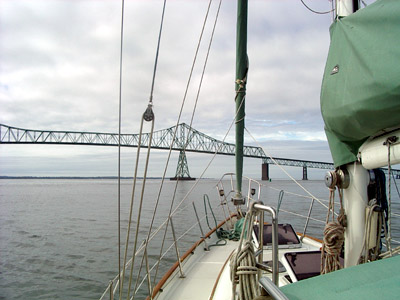 After we tied up at the West Basin, Patrick took off walking for Englund Marine, about a mile away on the little map that we got from the harbormaster. He got there just a few minutes before 5:00, only to find that the store had moved. The new address was just on the west side of the boat basin. On the way to dinner, we looked for the new address and could not find it. Other stores on the map were also closed or moved. It's time for map revision! 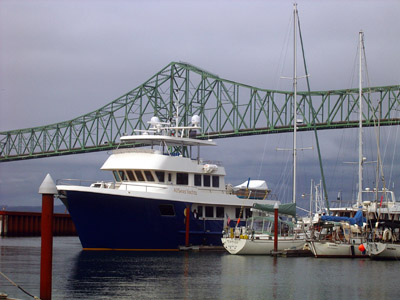 No matter how big your yacht, there's always a bigger boat. Tango is dwarfed by a new trawler at Astoria's west basin.

10/21/08. At 0610, we left the dock at Astoria, bound for the Columbia River bar and the deep blue sea. We crossed the bar two hours later, motoring in low swells as the sun rose in cool, humid, clear air. Aboard: Dennis Todd, Craig Latham, and the crew of Wind Horse III: John Aarons, Mark Duffy, and Patrick Robertson. 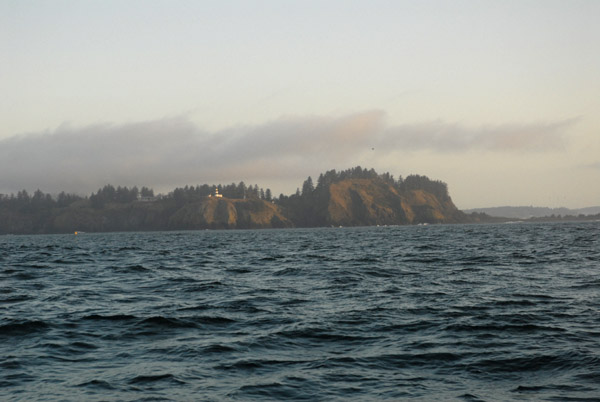 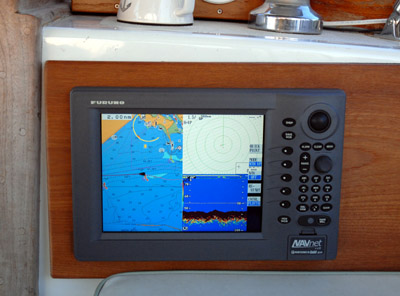 The chartplotter/radar/depth sounder at the mouth of the Columbia River. 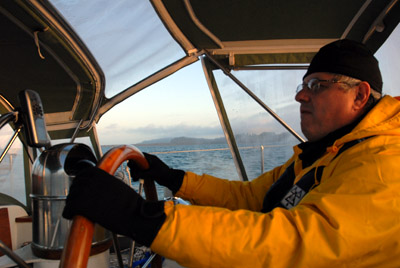 John at the wheel. 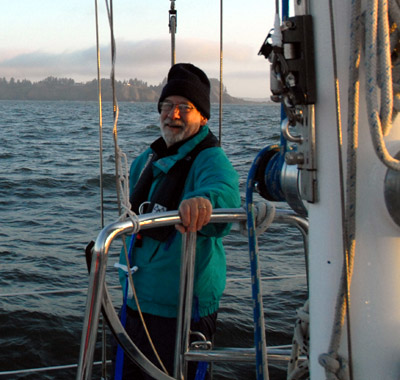 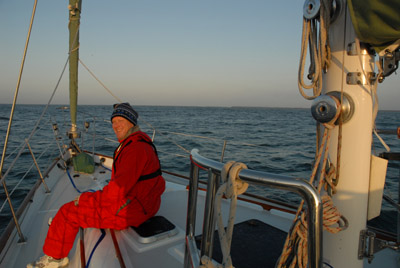 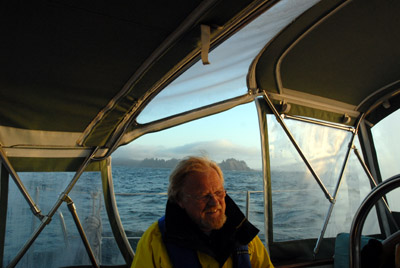 Patrick with Cape Disappointment behind him.

After motoring west to avoid Peacock Spit, we turned NNW. An hour later, we raised the sails and made 6.2 knots broad-reaching in a ten-knot south wind. Unfortunately, the wind dropped after a delightful hour of sailing. We furled the sails, started the diesel, set the autopilot, and kicked back, rocking and rolling in 8- to 10-foot swells. We stayed about ten miles off the coast and encountered no traffic, motoring the rest of the day and all night. We had a favorable current almost all the way to Cape Flattery . 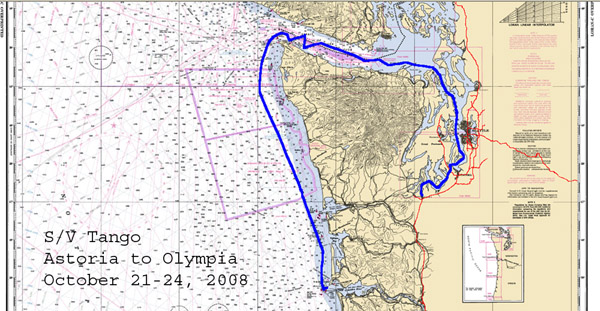 Craig had a great time in the galley, and we all benefited from his enthusiasm when he cooked grilled cheese sandwiches and experimented with the pressure cooker and a rice and bean mix. The gimbaled range worked well, holding the pots even when the boat rolled from side to side. 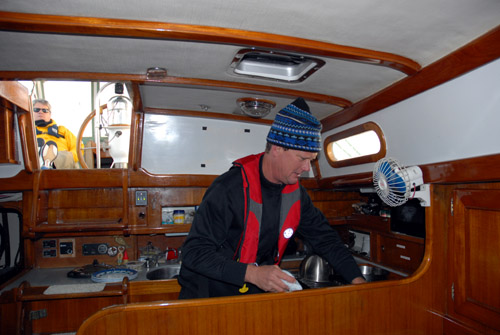 10/22/08. At 0800, we entered the Strait of Juan de Fuca and started powering into a 25- to 30- knot wind, according to our masthead weather instrument. In a beautiful dawn, our speed over ground dropped to 3.8 knots. At 0925, we raised the sails, the main reefed, and turned the engine off. For five hours, we beat upwind. 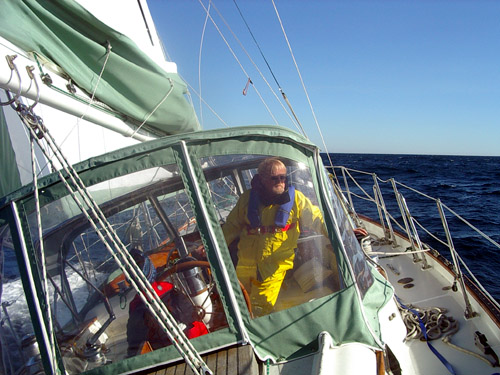 The wind built and we were overpowered, so we dropped the main to the second reef and furled in some of the genoa. Tango was in the groove, sailing six to seven knots close hauled, so well balanced that we could take our hands off the wheel. A gust would hit, she would heel a bit then accelerate with little weather helm. Too soon, the wind died and we had to begin motoring again.

The second night aboard, we left the heater on all night. The crew on watch in the bubble kept the curtains zipped and enjoyed a warm night.

10/23/08. We turned south into Admiralty Inlet in a calm and clear night. Just after dawn, the Aqualarm started its raucous clanging. A quick scan of the gauges showed the engine temperature in the normal range but the oil pressure low at 20 psi. We pulled out of the shipping lane and shut the engine off. I added a quart and a half of oil. When we started the engine, the oil pressure climbed back to 50 psi and the Aqualarm ceased its clangor. 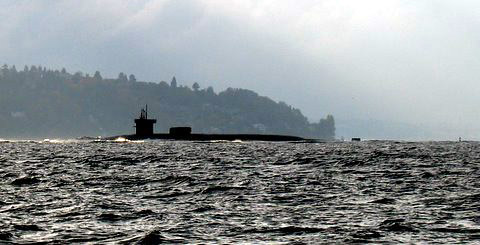 We motored south in Puget Sound, dodging nuclear submarines, ferries, freighters, and tugs. (This photo and the following two were taken by Patrick.) 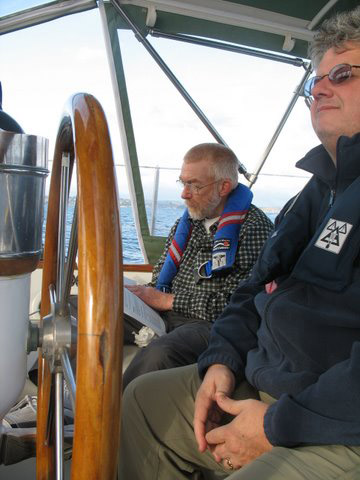 John on watch while Dennis tries to decipher the radar manual. 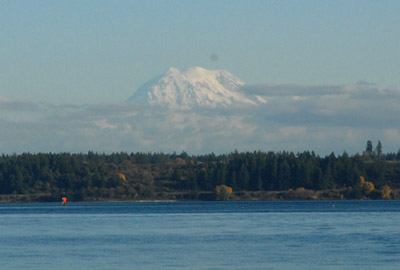 Mt. Rainier is another distinctive landmark near Puget Sound. 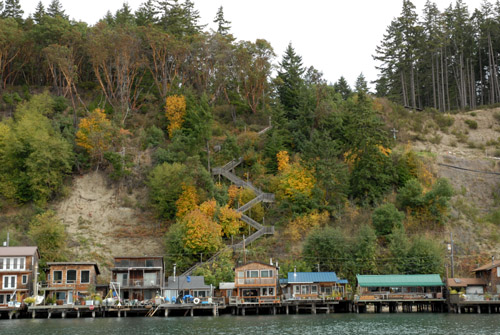 Tacoma Narrows was fun, as always, as we admired the eclectic and inventive homes on pilings along the narrows. Without road access, the homes all have boat cranes and small boats resting on the front deck. The only other access is by steep and long stairs that descend from the top of the bluff. 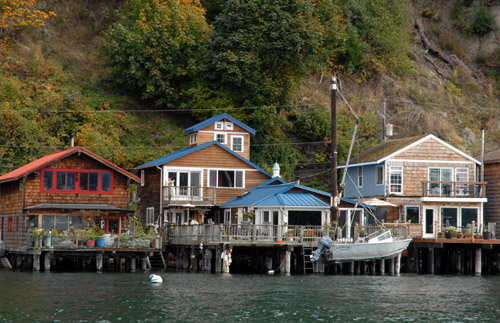 At 1725, we noticed a smaller sailboat, about 20 feet long, with its sails up, ghosting along. I admired the tenacity (or the leisure) of sailors who would use such a small breeze. But when we heard their horn signal, we suspected that there was more to the story.

We turned off our course and circled them. They said their motor had quit and they needed to get to Boston Harbor, a couple of miles away. We took their line and towed them almost to their dock.

As we approached Swantown Marina, our destination, the sun had set and the glare of shore-side lights on the dried salt spray encrusting the windshield made seeing difficult. The channel splits at a confusing cluster of lights and day markers. We wanted to go in the east channel, but I suddenly realized when I looked at the depth that we were out of the channel. We had gone around the wrong side of one of the markers. With some abruptness, I shove Mark aside from the wheel and turned it hard over. Fortunately, the tide was high enough that we never had less than a foot and a half of water under our keel, but I was tense for a few moments until I saw the depth increase to 19 feet and I knew we were in the channel again. 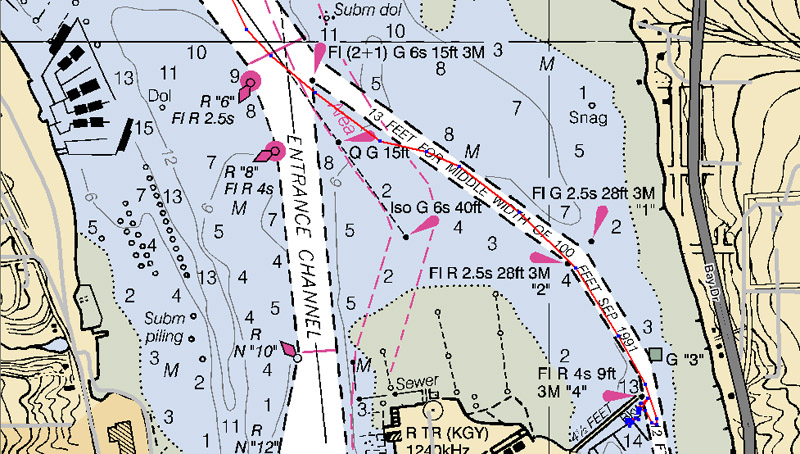 We idled along, trying to figure out landmarks, when we heard a whistle from our beam. Someone on deck said, There's Peter! He was standing on the pumpout dock, where we had agreed to meet. I put Tango in reverse, turned the wheel hard to starboard, and cranked up the throttle. She slewed to a stop and with a couple of throttle bursts in forward and reverse, she made a U-turn and headed back toward the dock. We tied up for the night and celebrated our landfall after a wonderful voyage. Tango will stay in Olympia for the winter and begin her Alaska voyage in April. 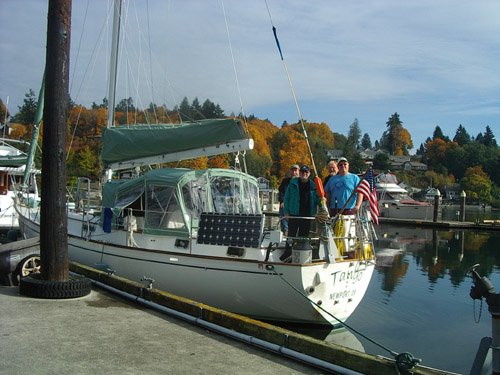 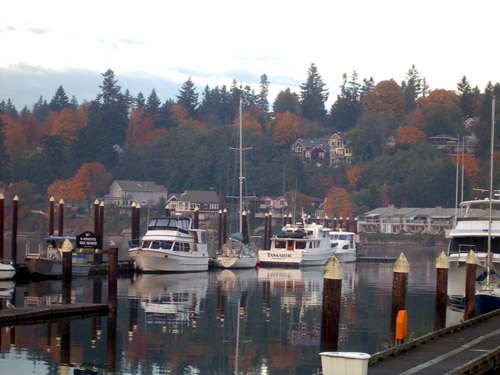 Tango's winter berth on the breakwater at Swantown Marina. 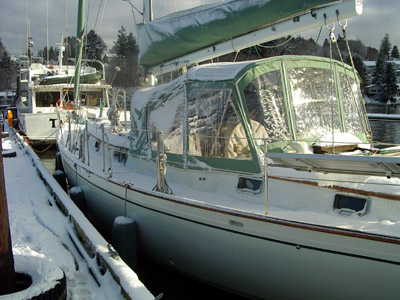 In December, cold storms rolled in, dumping snow on Olympia. 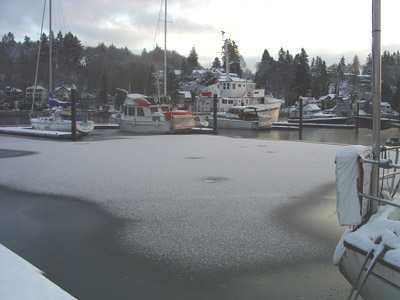 It was so cold that a thin layer of fresh water in the marina froze and collected snow.

1/13/09. With Eric Olsen and Dennis Todd aboard, Tango motored to Boston Harbor to refuel in cold, clear weather. 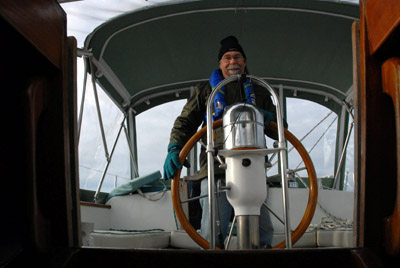 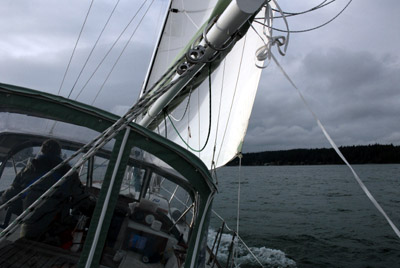 In Dana Passage, we couldn't make enough way upwind so we furled the sails and motored back to Swantown. It was invigorating to sail in view of the snow-clad Olympic Mountains.