Thursday, April 23, 2009. 15:00 hours. We’re motoring in Dana Passage, the engine is purring, the boat is clean, the holding tanks are empty, the water tanks are full, and we’re headed for Alaska. Life is good. 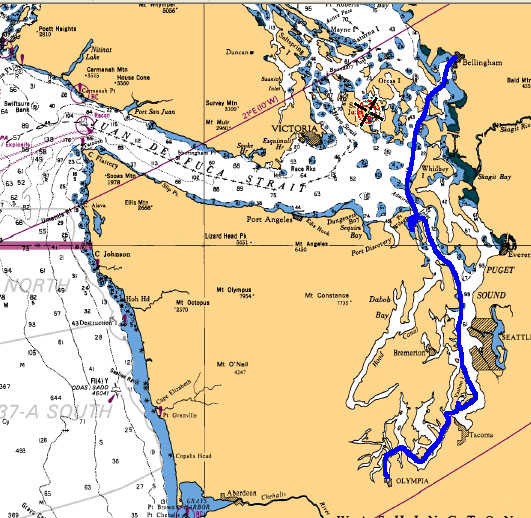 The first leg of the voyage, Olympia to Bellingham.

Aboard: Dennis Todd, Bob Durnell, Patrick Fitzgerald, and Mark Duffy. Our departure was a bit delayed by last-minute shopping, but we got underway without any problems. There were jubilant handshakes all around when we were finally convinced that we were underway.

Peter and I had arrived Tuesday night, my Ford pickup full of gear including Clara T, the home-built dinghy. We off-loaded everything but the dinghy and packed supplies and gear into every nook and cranny that we could find. Yesterday, the mechanic installed the rebuilt fuel injectors and new exhaust mixing elbow. After he was finished and I got back from Puget Sound Inflatables, where our life raft had been re-packed, we took Tango out for sea trials. We were delighted that the engine ran cooler and smoother than ever before in our ownership.

Bob, Patrick, and Mark arrived about 20:00 and yarded two carts full of luggage, food, beer, and other necessities down to the dock. What seemed like a mountain of gear, beer, and food slowly disappeared into cabinets and storage spots. I hope we’ll be able to find it when we need it!

This morning, we drove to the Thriftway and loaded up with six more bags of groceries. Eventually this new mass was assimilated. We have a cavernous ice chest in the galley—it is full of many cases of beer, containers of frozen food, and a few perishables. The hidden space under the refrigerator is crammed with vacuum packs of granola and rolls of paper towels. More paper towels are stuffed into cabinets in each head compartment. Squashes are hidden in the cabinet behind the settee back. Fresh fruit shares a cabinet with the first aid kit. A box of facial tissues is on the bookshelf. We’ll be rearranging and moving everything again and again, I imagine. 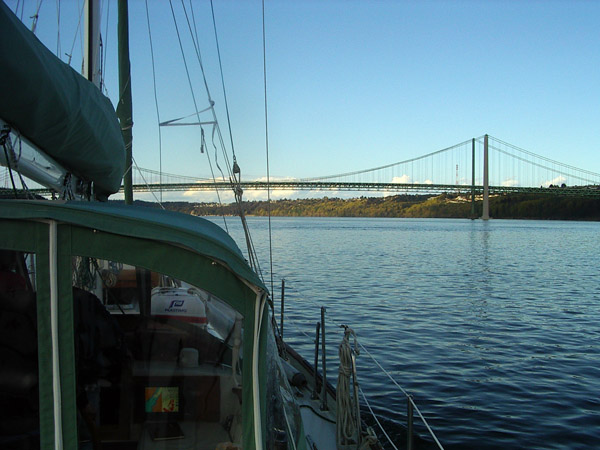 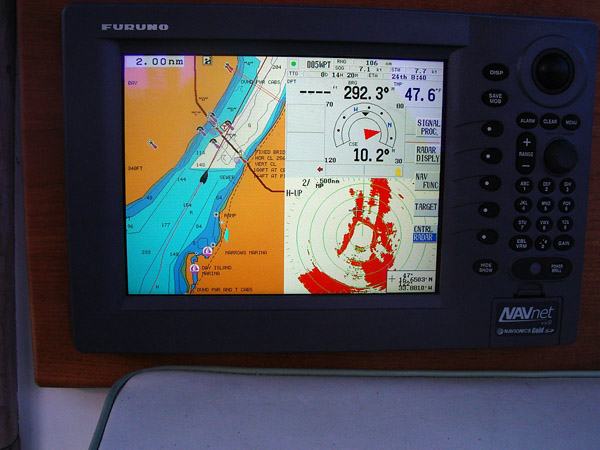 The radar and navigation screens just before we went under the bridge.

19:45. We dropped the anchor in Quartermaster Harbor while Bob stir-fried bok choy and other vegetables and heated the fish chowder that Patrick had made and frozen before the voyage. Good smells filled the air as we congratulated each other on the start of the voyage. 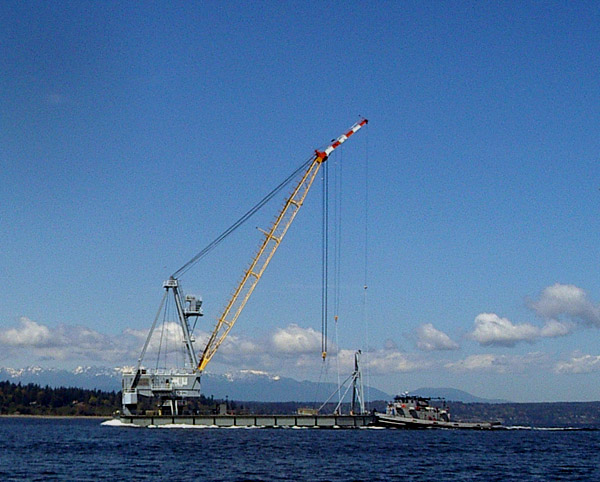 Friday, 4/24/09. The anchor was on deck and we were on our way before 08:30. We motored all day, making 63 nautical miles to Port Townsend, where we docked just long enough to fill the water tanks. We headed across the bay and set the anchor in 25 feet of water off the entrance to Kilisut Harbor. We wished we could have entered the harbor, but it was too shoal and narrow a channel for Tango. Instead, we let out plenty of rode (some 220 feet; our scope was more than 8:1) because we were on a lee shore. The fetch was only a couple of miles, but it was plenty for the wind to raise some pesky waves later.

The evening forecast warned of small craft advisories the next day in the Strait of Juan de Fuca, with predictions of 25-knot northwesterly winds. It was exciting news—we would finally be able to sail! But it turned out that the only winds we got were in the middle of the night. Patrick and Mark were sleeping restlessly in the cockpit. The whistling of the wind, the flapping of the canvas, the rattling of the rigging, the rolling of the boat, and the splash of the waves inspired them to estimate wind speeds of 40 to 50 knots. My guess from the security and quiet of the aft cabin was 20 knots. (Later, in Bellingham, I checked the NOAA weather web site and found that a nearby air base had recorded midnight winds of 21 knots with gusts to 29. They were chagrined that it wasn’t greater.) 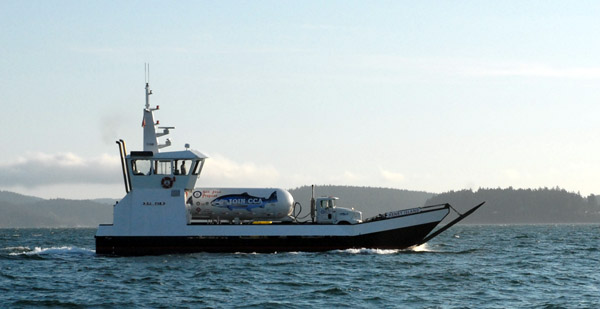 Propane delivery aboard a landing craft.

Saturday, 4/25/09. After a night that wasn’t very restful we set off for the Strait with high hopes of sailing. We rigged everything ready to raise sails. But all day long as we motored at 6 knots, the flag on the stern hung limp or waved back and forth as Tango rolled in the swells. It was a great day for motoring, and we landed at Bellingham about 16:15. Finding our way to the guest dock in the east basin was a bit of a challenge, but we prevailed. 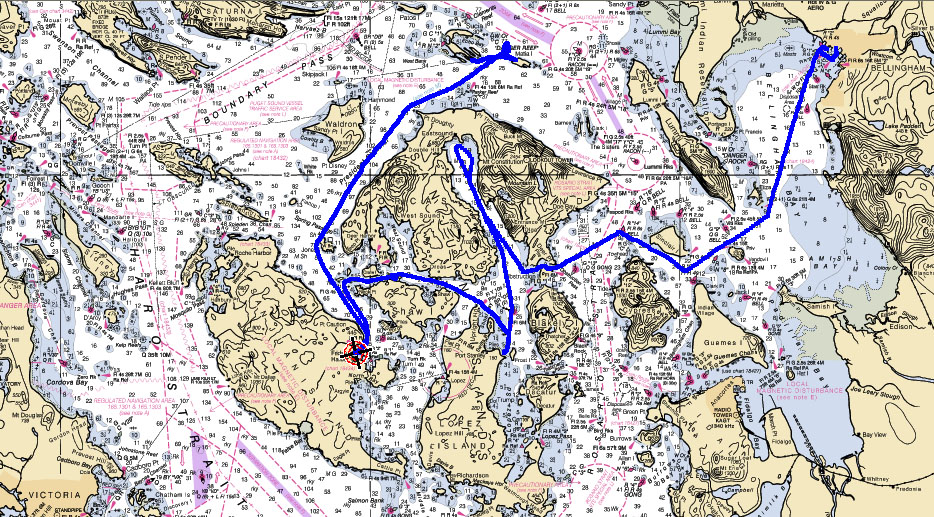 The second leg of the voyage, Bellingham to Friday Harbor (with detours).

Sunday, 4/26/09. Mark and Patrick caught a taxi at 07:30 for the train station. Bob and I motored to the fuel dock and filled the tanks then headed for Obstruction Pass and the San Juan Islands. We got to the pass about an hour after slack and had a 3-knot adverse current. By riding the eddy on the inside of the turn in the channel we were able to keep our speed up. We cruised to the northern end of East Sound on Orcas Island then turned south again and tied to a mooring buoy at Spencer Spit State Park.

As the final light of the day faded away, a school of tiny fish splashed at the surface, feeding on the drift that accumulated in a current swirl nearby. It sounded like rain and as the ripples spread from each fish’s bite at the surface, it looked like rain as well. Two seals stalked the fish, which disappeared every time they came near. A pair of Canada geese on a small island nearby honked antiphonally, sometimes with a back beat, all evening long, even when they flew about in big circles in the fading light.

Monday, 4/27/09. We left Spencer Spit about 07:20 and motored to Friday Harbor. Except for cutting cookies to dodge a ferry in the tightest part of Harney Channel, the passage was uneventful. At Friday Harbor, we stocked up on groceries and hardware before leaving the dock at 13:50. As soon as we rounded the NW point of Orcas Island, we raised our sails in a 10- to 15-knot NW breeze—the first sailing of the voyage.

A couple of hours later, we were at Matia Island and found that the very small dock was empty. We dropped the sails and motored in.

The water at the dock was so shallow that I was surprised our keel wasn’t aground, but the tide was rising so we decided to stay for a few hours. 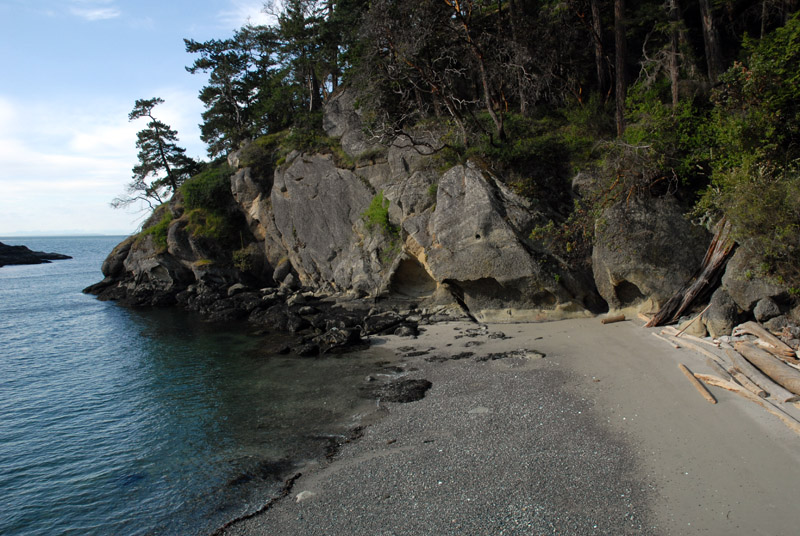 The cove next to the dock. 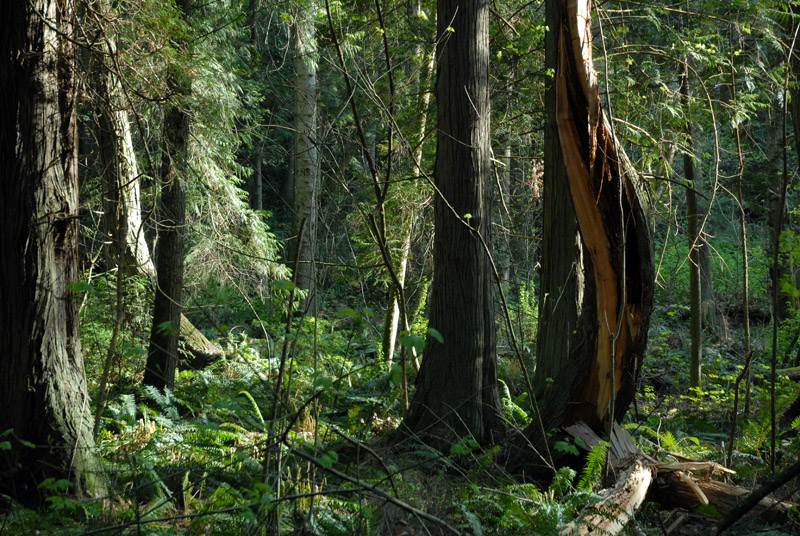 Matia Island is covered with a climax forest dominated by late-succession species including cedar and yew. It had been logged years ago (the tall stumps with springboard notches show that it was before chain saws were in use) and many of the bigger trees show fire scars. It’s the type of forest that covered many of these islands before white settlers logged them. 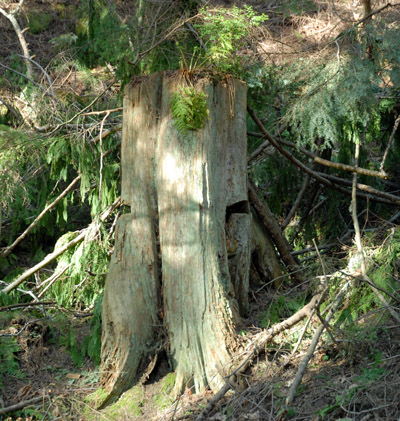 Loggers using hand-powered crosscut saws logged Matia Island many decades ago. This stump show two notches where they stuck "springboards" on which they stood to chop the undercut and saw the back cut. Because the effort was done entirely with human power, they tried to minimize their work by cutting the tree above the butt swelling. 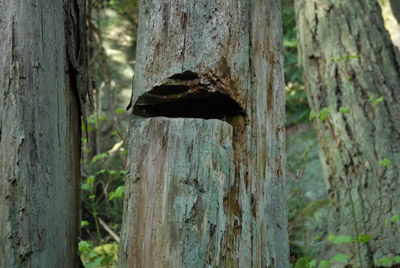 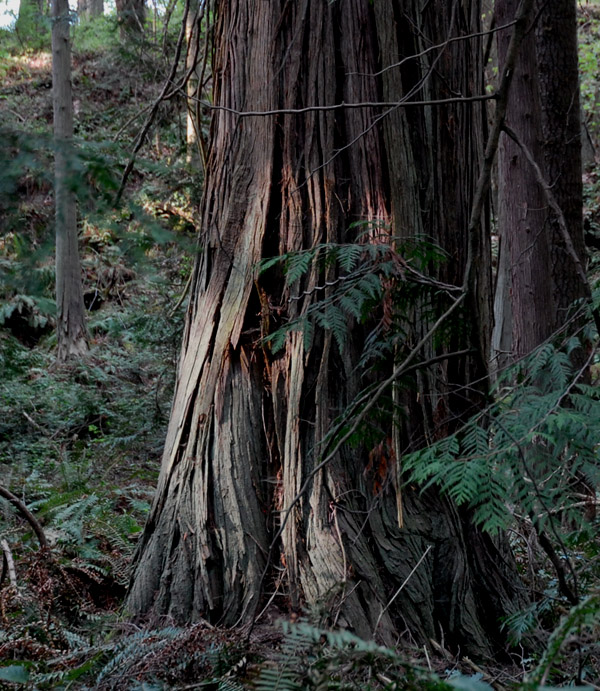 The cedars were prized by the natives, who made baskets of bark strips and dugout canoes from the giant boles. 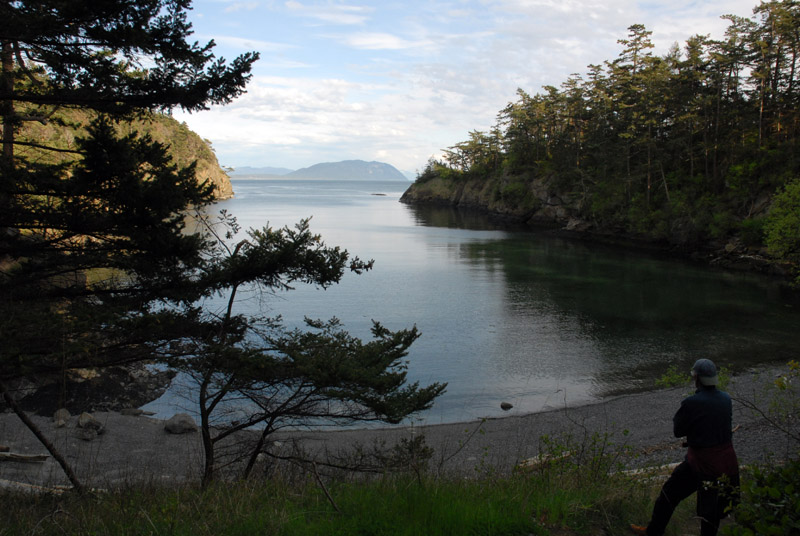 A cove on the east side of Matia Island. 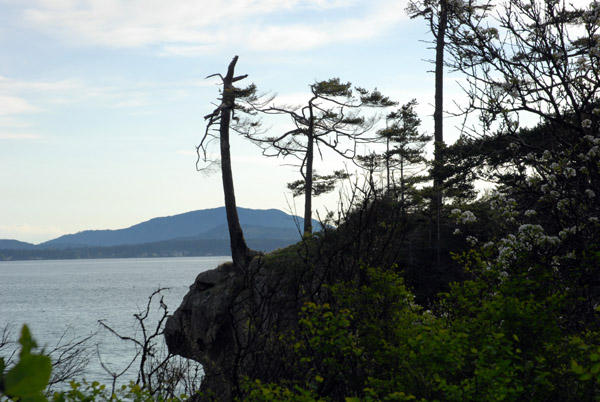 We hiked the mile-long trail that circles the island and then set a course for nearby Sucia Island. We found the single mooring buoy in Snoring Bay unoccupied, so we tied up in my very favorite bay. Two bald eagles watched us from a tree fifty yards away.

The sandstone cliffs next to the bay are finely sculpted and shaped by the waves. Madrone trees color the hillsides. A sandy beach at the head of the bay collects wave-polished driftwood. Mt. Rainier and the summit of Orcas Island dominate the skyline to the south. What a wonderful little cove!

Tuesday, 4/28/09. I took a shower in the forward head compartment. It was the first time that we had used the shower, and it did not turn out well. I felt clean and refreshed until I looked through the floorboard grid and saw that the shower sump was full of water. The outlet was clogged with debris. I pulled up the floorboards and dipped the water out with a small bucket, and dug through the trash clogging the drain, It still didn’t drain. I pulled the floorboards in the main cabin up and investigated the sump pump. The drain line between the sump and the pump was clogged. I spent fifteen minutes trying to clear it and finally decided I had to replace it. As I was taking the hose off the pump, the inlet fitting on the pump housing broke. I replaced the hose and clamped it tight to the stub of the broken-off fitting. The pump still leaked. Investigating further, I found that the outlet hose was leaking at the fitting. As I tried to pull that hose off, its fitting broke off the pump housing—it was already cracked, it seemed, causing the leak. But after a couple of hours of work trying to fix it, I had to abandon the project and call West Marine for a new sump pump. My effort wasn’t fruitless—the shower sump is cleaner than ever.

We motored to nearby Fossil Bay where we had enough room to let out all of 300 feet of anchor rode. Bob dove into the compartment below the vee-berth to replace the hose supplying the deck washdown fitting. He had led the way in hose repair frustration a couple of days before with a fruitless effort to splice this hose. Now we had new hose to replace it. This time he was successful.

I took on the mess in the aft cabin. Since the beginning of the voyage, I had been sleeping in a narrow slot wedged between the hull and a big pile of bedding, pillows, camera cases, clothes bags, and miscellaneous. I spent hours sorting and stowing and improved the situation, but I know that there will be more re-organization as time goes on.

Wednesday, 4/29/09. We weighed anchor before 07:00 and headed for Friday Harbor. I had forgotten my passport, so Jill mailed it on Monday to me care of the Harbormaster. Along the way, a couple of porpoises crossed our bow. Bob was excited--it was the first time he had seen porpoises in the wild. 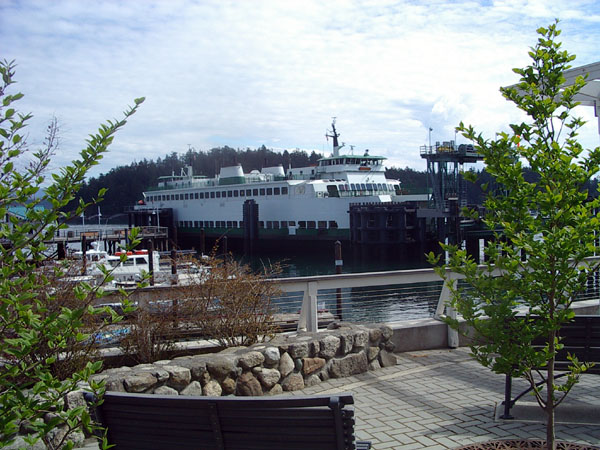 After we reached the guest dock, we went shopping again with the usual list of boat parts, hardware, groceries, and ice. I got a haircut and beard trim from a loquacious barber and a new shower sump pump from West Marine. Bob installed the new pump and hose while I occupied myself with other chores. I took a shower at the harbor office and got the promised mail. We’ll soon set off for Canadian waters. 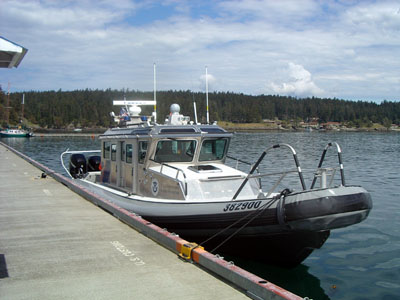 A US Customs/Homeland Security boat tied up to the dock we shared. 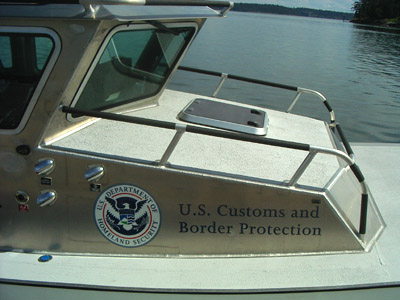 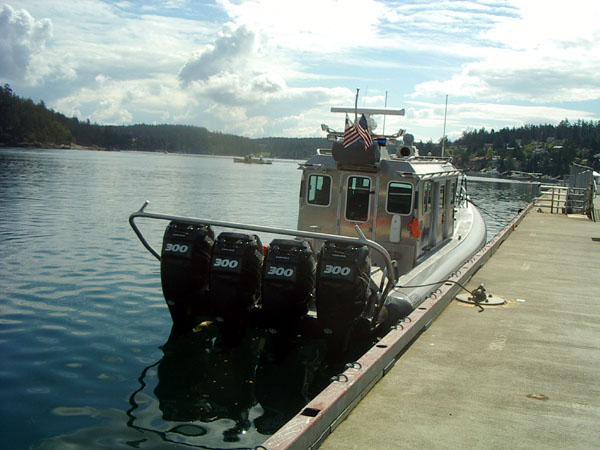 With 1200 horsepower, this is not a vessel that can be evaded easily.